Localizing your Business for India 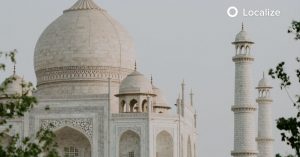 India is a country ranked second in the world in terms of its population – 1.3 billion people. The only country with more people is China. In spite of its billion-plus residents, internet access in India is still not widespread. In fact, only approximately 400 million members of this huge population have access to the internet. Access is mainly through people’s phones and many of these phones function on slower 3G networks. Also, credit card usage is low and buying power is limited. Still, Localizing for India can prove to be prosperous.

Think Beyond the Drawbacks

So, you may ask, why should my company want to sell products or services in India? The reason is that, despite all of its problems, India represents one of the fastest growing e-commerce markets in the world as millions of Indians are increasingly discovering and enjoying the benefits of shopping online. Bottom line – the number of online Indian shoppers will only keep on growing.

Although the British endowed India with a common language, it’s not sufficient to assume that your website or phone app can just rely on English. India is actually home to more than twenty official languages – here are the top seven ranked by the number of speakers:

By way of a startling comparison, there are only 80 million native speakers of French and 65 million native speakers of Italian. However, even though an astounding 422 million Indians are native Hindi speakers, most companies marketing to the Indian population stick only to English. So, kudos to YouTube which has a global gateway menu that includes ten Indian languages.

Amazon is challenging Flipkart, India’s homegrown shopping company, with a growing number of distribution centers and an enticement to subscribe to Prime for the equivalent of approximately $15 per year. Amazon claims that during the festival of Diwali in 2016 it sold 15 million units. This is almost equal to the units sold by Flipkart.

India has approximately 500 million vegetarians because of the widespread Buddhist belief called Ahima which means do no harm. As a consequence, food chains such as McDonald’s have found it necessary to localize their menu – an Indian vegetarian can now order a vegetarian McAloo Tikki burger. It should also be noted that cows are considered sacred to Hindus and Indian Muslims shun pork. So care must be taken in how animals and meat products are depicted in your advertising.

All that Glitters Could be Gold

India is one the world’s primary importers of gold and the precious metal plays a large part in Indian life. Because only about one-third of the population has a bank account, gold is seen as the safest place to store wealth. Gold jewelry and other gold items are the most popular gifts for all kinds of celebrations including weddings. And, a jewelry shop in Surat is even selling unique gold bars engraved with the Indian Prime Minister’s face.

How to Localize Your Marketing Efforts in India

Localize is a translation management platform that provides an effective and easy solution to marketing your products or services to the speakers of the primary native languages of India. Our software provides you with access to native-speaking translators of these essential languages. Translating your content into Hindi and several other of India’s major languages will put you far ahead of the competition. Check us out to see how we can assist you to grow your business in India.